So much for the 30 days of blogging challenge in December. Honestly, if I was boring myself to death, I can only imagine what I was doing to you, gentle readers.

It's the first day of spring, and another snowstorm will hit us tonight.

Spring quilt show season is underway, and everything fell into place with only hours to spare.
I have three new patterns. 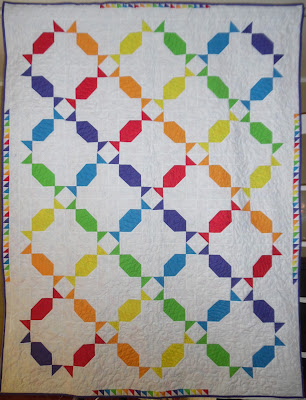 This is "Taffy Twist with Gumdrop Border." It's fat-quarter friendly (although it works equally well from linear quarter-yard pieces) and fun! Don't let those tiny gumdrop triangles scare you; they're made from the bonus triangles you have left over from making the blocks. There's plenty of negative space for those of you who like to do lots of quilting. I've already taught this as a class.
By the way, all the fabrics are "Lola" by QT (Quilting Treasures).


The next one up is "Linky Dinky".  The quilt shown is a generous lap quilt (48" x 64"), but I also give directions for a full/queen bed size which would make a great modern wedding quilt.


I used "Lola" again for the background; links are Ink & Arrow "Toucan Do It!".

I don't design a lot of appliqué, but this was inspired by a truly hideous (and completely different) pieced quilt I saw in an old quilt book. The only thing I liked about the original was the use of red for the vases. Instead of lots of small pieced blocks, I adapted it to the mid-19th century appliquéd four block quilt. It has all the drama with none of the tedious hand work. I used a variety of QT tonals from various lines. The vases are QT's "Ombre Scroll", which I thought most gave the illusion of ruby glass. 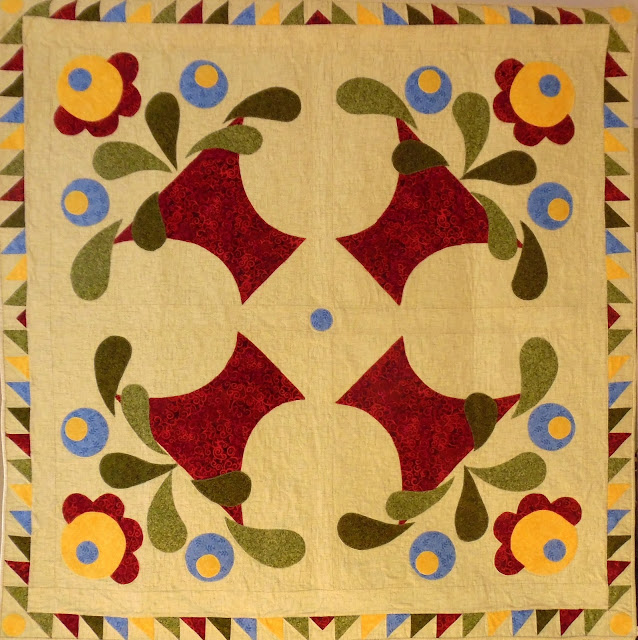 Never one to leave well-enough alone, I had been playing around with my Periwinkle Template Set. I asked myself a lot of "what if's", and when it was apparent I would need to re-order in the not-to-distant future, I got serious about what else I wanted to do with it. A minor tweaking would allow quilters to do so much more than just make periwinkle blocks.

Above is the (fussy cut) cover quilt I created from my original Periwinkle Template Set.
I then made one with scrappy bright periwinkles against a two-color pieced background. I love this one! 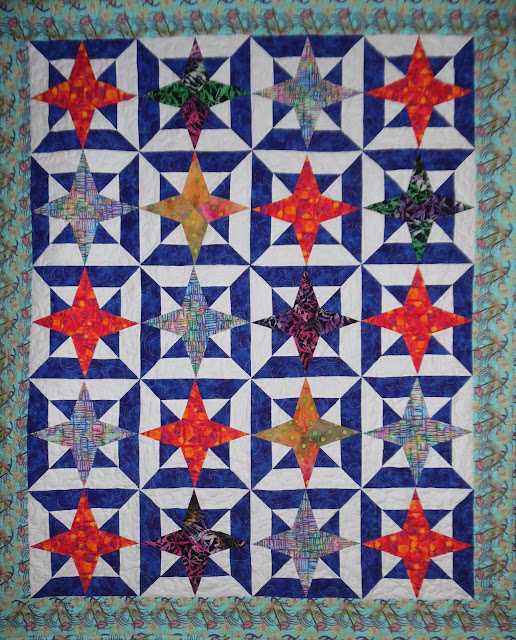 At this point I realized a small change would give big results, and I developed "Periwinkle Plus™".  The following quilts are all made from this new set.
Tumblers are perfect for scrap quilts. I used up lots of small pieces of country colors in this lap quilt.

This was a fun, easy project. I alternated medium and dark tumblers with lighter "neutrals".

With the new templates, three periwinkle "points" could be appliquéd onto the corner of a block to make a fan. I had lots of small Oriental fabric scraps, which were perfect. And how about that awesome batik background with the soft green fans which just happened to live in my house?


I quilted straight line fan-like "flowers" across this quilt. I like the effect a lot, and will probably use this again on other quilts.

Smaller tumblers (short, fat and short, skinny) can be cut from 2 1/2" strips using my template set, and twelve periwinkle point can be sewn together into a Dresden plate. This little "Dresden Sampler" uses all three, and can be made from six leftover 10" squares and a fat quarter. Again, another great class project.
This past weekend I vended at the Thimble Pleasures Quilt Guild show in Upton, MA. I also demo'ed the template set both days.

Next up (April 14th and 15th) I'll be at the Pioneer Valley Quilt Guild show in Springfield, MA. This will be my third time there, and I will be demonstrating Periwinkle Plus™ Template Set on Saturday.
The following weekend (April 21st and 22nd) I'll be back home in Rhode Island at the Narragansett Bay Quilters Association show in North Kingstown.

It's been years since I participated in a blog swap, but this one from Barb at
funwithbarbandmary.blogspot.com was calling my name. YIKES! Sixty-six 6-inch blocks. Yes, I had to make sixty-six blocks for the swap. I had the choice of modern or Civil War reproduction, and as I had quite a bit of retro prints in my stash, I opted to go that route. These are some of the sixty-six lovelies I got back, and I'm looking forward to playing around with them and seeing what I come up
with. I cut my pieces with my new-ish Accuquilt Go cutter. So nice to have all those dog ears trimmed off the HSTs; everything went together perfectly!

Posted by Barbara Chojnacki at 9:45 AM